Hip-hop supergroup Spillage Village have reunited after four years for the release of a new album called Spilligion. As a preview, the Atlanta artists have shared the first single, “Baptize”, featuring group members EarthGang and J.I.D.

Spilligion is the collective’s fourth album overall, following on the ursine trilogy Bears Like This (2014), Bears Like This Too (2015), and Bears Like This Too Much (2016). By the time the latter record was released, the Village had grown to include EarthGang, J.I.D., 6LACK, Mereba, JurdanBryant, Hollywood JB, and Benji. They were barely getting started when, in late 2016, 6LACK broke out with the single “Prblms”, followed by EarthGang and J.I.D. signing to J. Cole’s Dreamville label the next year. The group was breaking apart because their dreams were coming true, and there’s no use crying over Spillage milk.

Now, though, the old friends have reassembled in a changed world. While Spilligion was begun before the coronavirus pandemic overran the United States, it was mostly recorded within the pressure of lockdown. As new single “Baptize” would seem to demonstrate, the group is also very aware of the summer’s protests against police brutality.

Produced by Johnny Venus, Christo, and Hollywood JB, “Baptize” finds EarthGang and J.I.D. in the role of outcast preachers — although their messages are more soul-stirring than overtly religious. EarthGang’s Johnny Venus leads things off with a staccato verse on state-sanctioned violence. “Police, they beat me, we storm the same streets/ We storm the same block, won’t stop ’til we free.”

J.I.D.’s spirituality is a bit more materialistic, though he does find time to mediate on all the “Blah, blah blah, sinnin’ and shit/ Adam and Eve dumb ass/ Apple eatin’ dumb ass.” Doctor Dot takes the closing verse, and he draws funny comparisons between himself and a biblical life, claiming he was “Made in his image, okay? I even work in mysterious ways,” and adding that he’s been “Burnin’ that bush like Moses.” The accompanying music video shows the rappers preaching to three different congregations, with some parishioners more sinfully dressed than others. Check out “Baptize” below.

Spilligion arrives September 25th and pre-orders are ongoing. The tracklist remains a mystery, but in June Spillage Village shared the lead single “End of Daze”. 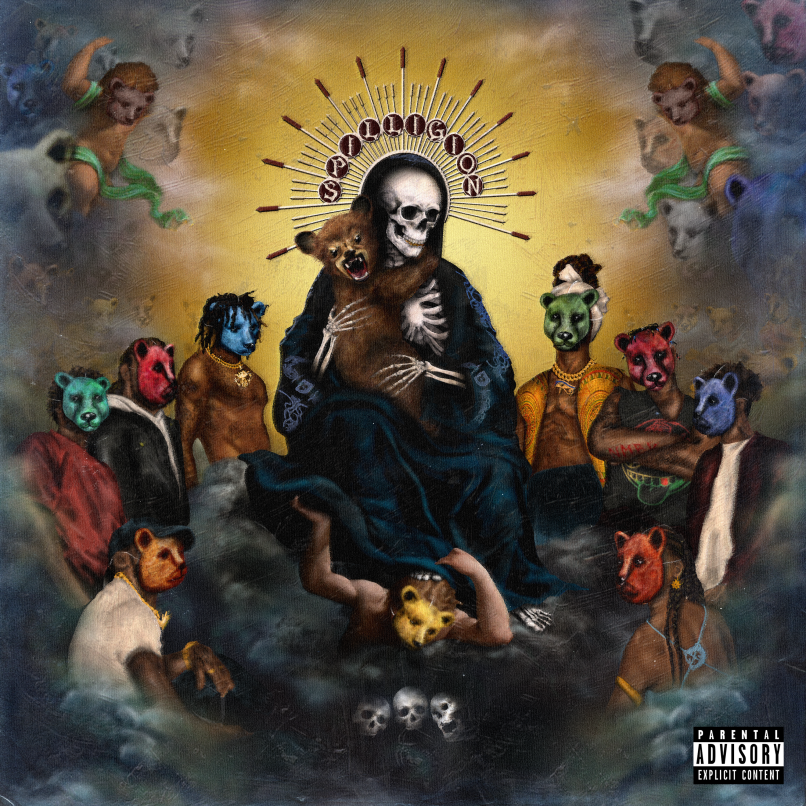